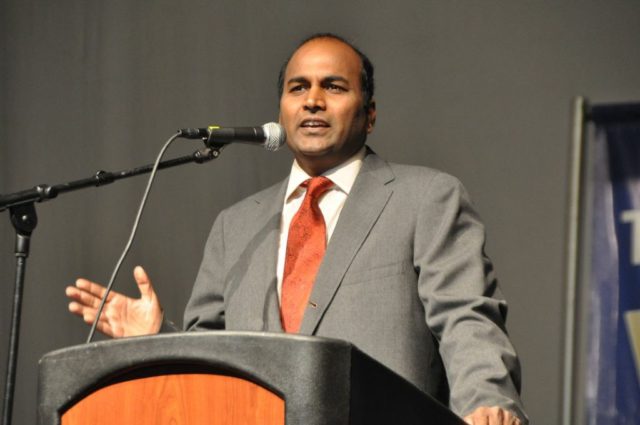 Sunil Robert has a mission to transform the world through his communication skills. In today’s episode, he discusses his journey of overcoming poverty and setting his own career path, dealing with adversity and developing resilience skills, transforming from a couch potato to marathoner, and helping others get beyond being a prisoner of their own assumptions.

After you listen, let me know your most important takeaway or a-ha moment from this conversation. Email me at ImperfectActionPodcast@gmail.com or tweet to @brocedwards and let me know.

Sunil Robert is an accomplished global executive with a career spanning 27 years across India, Europe and North America having worked in reputed companies like Eureka Forbes, Acer, iflex/Oracle and TCS. He started his career in the late ‘80s in Engineering Sales, and moved to Advertising and finally settled in Corporate Communications and has won global accolades for his ability to build brands. He is the only Indian to have ever won a “Stevie” award (touted as Oscars in Business world) for Communications in 2007. He was also listed in the Outstanding 50 Asian Americans in Business in 2009. He was also the PR Professional of the year in 2009.

His mission is to ‘change the world through his communications skills’. In addition to being a writer, he is also a motivational speaker and leadership coach. He has delivered training programs to nearly 10,000 engineers and executives working in Fortune 50 corporations like Target, Apple, Walgreens, Home Depot, AIG, Bank of America and other leading firms. An avid marathon runner, he ran six prestigious marathons (including Boston, Chicago and NYC) in the world and offers his own experience in transforming his audience. He is a contributor to many publications and his notable writing was to Encyclopedia Britannica, India series.

His debut work – a rags to riches memoir ‘I Will Survive’ launched in 2010 was a bestseller endorsed by global leaders like Ratan Tata, Ramdorai and Joseph Kennedy II. His second book ‘Bound To Rise’ has just been launched in India and has recommendations from leaders like Anand Mahindra, N Chandrasekaran and Dr. Bala Balachandran. He was recently selected by iCONGO for the Rex Karmaveer Global Fellowship award for his effort to inspire India’s youth and is listed among the Outstanding 50 Asian Americans in Business.

His passion for inspiring young people has led him to create a course on Teendemy.com and he also provides leadership lessons on audvisor.com. He is an active Toastmaster and volunteers his time at the East Jersey State Prison teaching inmates Communication skills. He studied Digital Marketing from Massachusetts Institute of Technology and Youth culture from Princeton University. Sunil currently lives with his wife Prafulla and sons Aman and Sahil in Edison, New Jersey. More about his work and accolades can be found on www.sunilrobert.com

This episode is sponsored by NutriFitt. I tried NutriFitt’s whey protein supplement after meeting the founder and hearing his journey and commitment to quality. I like to support up and coming businesses so I gave it a try and was impressed. It mixes immediately and the chocolate flavor actually tastes like chocolate, not like some chemical engineering committee’s overdone attempt. It has no artificial sweeteners, colors, or preservatives. Plus, it includes probiotics and is easy on the stomach.

The true taste test? My teenage daughter even likes it.
There are a lot of supplement brands on the market and NutriFitt is my favorite. Because you’re awesome and a listener of Imperfect Action you save 15% on every order. Just use the code TAKEACTION (one word, ALL CAPS) at checkout.

Theme music: Just a Little by Shadow of Whales. Big thanks for letting me use the song. Find them, check out their videos, and get their music.