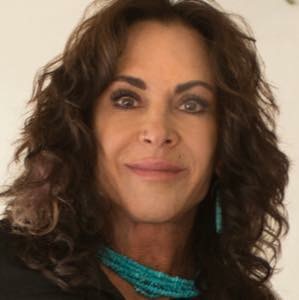 “Just keep pushing. It’ll move. Keep pushing outward.” Catt Tripoli discusses her unique approach to weight training which uses a hyper-focused intentionality focused on moving muscle as opposed to just lifting weight. Along the way, she ties lessons from being a world champion bodybuilder to lessons from being an entrepreneur.

From her official bio:

Catt Tripoli, formerly Cathey Palyo, is a former professional bodybuilder who has been involved in the health and fitness field for almost 30 years. She has been the creative force behind five gyms, including Power House Gym in Santa Rosa, CA, which she currently owns and operates.

Bodybuilding saved Catt’s life; through dedicated practice, she gained not only outer strength, but an inner resilience that transcends sport.

Raised in an apocryphal religious belief system that severely restricts its members’ involvement with the world outside, Catt found the courage to break away and seek her own way. Once she found bodybuilding, she rose quickly through the amateur ranks, earning her pro card by winning the overall title at the Ms Universe competition in Singapore in 1986. In 1988 she won the Ms. International contest, the highlight of her professional bodybuilding career. She has been featured on the covers of Muscle Development and Muscle & Fitness magazines, as well as several international fitness publications in Belgium, France, the Netherlands and Greece. She was only the second woman to be featured on the cover of Flex, bodybuilding’s premier magazine.

For decades, Catt honed her craft, an integrated mind-body-spirit approach to health and fitness that draws from such disparate sources as ballet, hypnosis, Western science, Native wisdom and, of course, bodybuilding. She now wishes to share what she has learned.

Get her book on Amazon (affiliate link):

There are a lot of supplement brands on the market, NutriFitt happens to be my favorite.

Because you’re awesome and a listener of Imperfect Action you save 15% on every order, just use the code TAKEACTION (one word) at checkout.